NON CLAMOR SED AMOR SONAT IN AURE DEI - NOT SHOUTING BUT LOVE RESOUNDS IN THE EAR OF GOD.

This site is dedicated to all Catholics who love and cherish the traditional Liturgy, who humbly seek to make it a living reality in their lives and delight being present at the Eucharistic Sacrifice by worshipping in the immemorial manner of their Forefathers in the Faith - not only by following the same ancient prayers and rituals but also participating according to the same time- honoured mode.

WE ARE PLEASED TO OFFER A BOOKLET THAT YOU CAN DOWNLOAD OF THESE IMPORTANT ARTICLES. 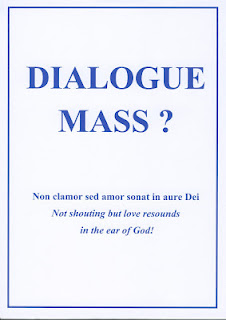 UNDESIRABILITY OF ITS PROMOTION

Even if it is readily conceded that Dialogue Mass is neither Modernist nor heretical this is not to say that it is desirable.  Many practices of the Church in previous centuries were abandoned for good reasons and it is most unwise to revive them now.  Even if there was a liturgy in the early Church which approximated to the Dialogue Mass it is well known that there was also Mass in the vernacular, Communion under two kinds and in the hand, Mass sometimes celebrated facing the people and a married priesthood (even the first Pope was married!).  None of these practices are in themselves against the Faith and were quite legitimate but recent history has proved what dire consequences have ensued when many of them were revived after the Second Vatican Council.
Neither is it in any sense desirable to introduce Dialogue Mass in places where it has never been the established practice before the Council.  The Faith of most Catholics was nurtured by the liturgical forms of their youth and there is no excuse to disturb this now and renew the bitter experiences of the pre- and post- conciliar years.  This was the praxis adopted by Archbishop Lefebvre in the Society of St. Pius X during the years when this Society was effectively the sole guardian of the Traditional Rites and this is surely the most wise and considerate position to continue to adopt at the present time.  One day the Liturgical Movement with its 20th century ideas and assumptions will be judged in the light of history.  To some extent this has already begun.  Until then, may all reforming zeal according to its questionable principles, cease!  As Paul says, “all things are lawful to me; but all things are not expedient”  (I Cor.VI.12).
Given this historical context of its appearance and the circumstances of its promotion in the life of the Church, it is paradoxical that, while rejecting so many nostrums of the 20th Century Liturgical Movement, some Traditional Catholics find the Dialogue Mass to be, not merely acceptable where it already exists, but would seek to extend its practice.
This would mean, if the practice became universal, that it would become impossible to say the Rosary, read any prayer book other than the Missal, or practice any devotion which does not involve external vocal participation during This would be a tremendous loss. There is, in fact, nothing in any Christian religion outside of the Catholic Church equivalent to the unique sight of a large congregation participating in silent adoration at Low Mass.
This is why Dialogue Mass should not be promoted or introduced in places where it was not generally found before the Council. By all means let it remain in countries where it was accepted in good faith before the consequences of the seemingly harmless innovations of the first half last century became clear. After so many decades it would be wrong to disturb the Faithful or introduce unnecessary controversy or problems when we already have more than enough of these to deal with as the situation of the Church continues to deteriorate.

It is noteworthy that an inherent contradiction is commonplace in advocates of Dialogue Mass. Either an attempt is made to prove that :

(a)    vocal participation by the laity was always and everywhere practiced (except, perhaps, for a short period in certain places) and that therefore this should be everywhere implemented or continued.  Otherwise :
(b)   the laity were deprived  of being able to respond during a thousand year period of liturgical decadence and therefore this situation should be corrected and dialogue restored.

In both cases the proponents of “silent “ Mass are considered to be wrong, if not actually obstinate and at odds with the mind of the Church! However, such a specious form of argumentation should not influence anyone against being unreservedly attached to the manner of assisting at Mass favoured by our forefathers in the Faith for over one thousand years!
One year after the incipient practice of Dialogue Mass was raising questions in certain quarters, the Sacred Congregation of Rites of August 4, 1922, issued a Decree which was sadly ineffective. The Decree was in reply to the question “May the congregation, assisting at the Sacrifice make the responses in unison, instead of the server?”
Reply: The norm is: Things that in themselves are licit are not always expedient. Owing to the difficulties which may easily arise, as in this case, especially on account of the disturbances which the priests who celebrate and the people who assist may experience, to the disadvantage of the sacred Action and of the rubrics. Hence it is expedient to retain the common usage, as we have several times replied in similar cases.